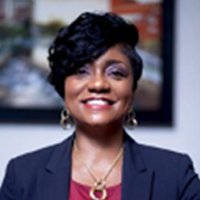 Felicia Johnson is the Commissioner of the South Carolina Vocational Rehabilitation Department (VR). She brings a wealth of knowledge and compassion to this position, with more than 20 years of experience serving VR clients in various capacities.

Commissioner Johnson began her career at VR with a three-month internship at the Muscular Development Center in August 1997, which led to a part-time role as a physical therapy aide. During this time, she completed a Bachelor of Science degree in exercise science from the University of South Carolina, after which she became a full time exercise physiologist.

In 2006, Commissioner Johnson was promoted to counselor in the Richland office, where she provided services to high school-aged youth, individuals who had experienced multiple barriers to employment, and handled cases involving the Client Assistance Program. The capability with which she managed these diverse responsibilities resulted in the opportunity to supervise the Camden, Richland, and Lexington offices between June 2008 and February 2014.

Commissioner Johnson was elected Treasurer of the Council of State Administrators of Vocational Rehabilitation (CSAVR) for the 2020-2021 Year, beginning July 1, 2020. She resides in Columbia, South Carolina and is married to Condie Johnson. They have two children, Chance (12) and Kennedy (9).